This summer is unlike previous ones, as attending art shows has been made all but impossible with the current social distancing requirements amidst an atmosphere of uncertainty in our city.  However, art must go on. And it is the artist, as cultural barometers of our times with their unique ability to perceive and express the complexities and absurdities in our society, that we must support in this time.

It is with this hybrid type of exhibition, which will likely become the norm soon enough, that we present Texas Emerging: Volume I, giving a physical space to the exhibition, but presented as virtual shows so that the audience is not limited by proximity, physical space, or time constraints.

Here, the artist, after months of being resigned to their studios, are able to create installations for their work in a gallery space for public viewing.  With the presumed limited viewing times, the show will be made available virtually for wider audience access and enjoyment.   - Sarah Foltz 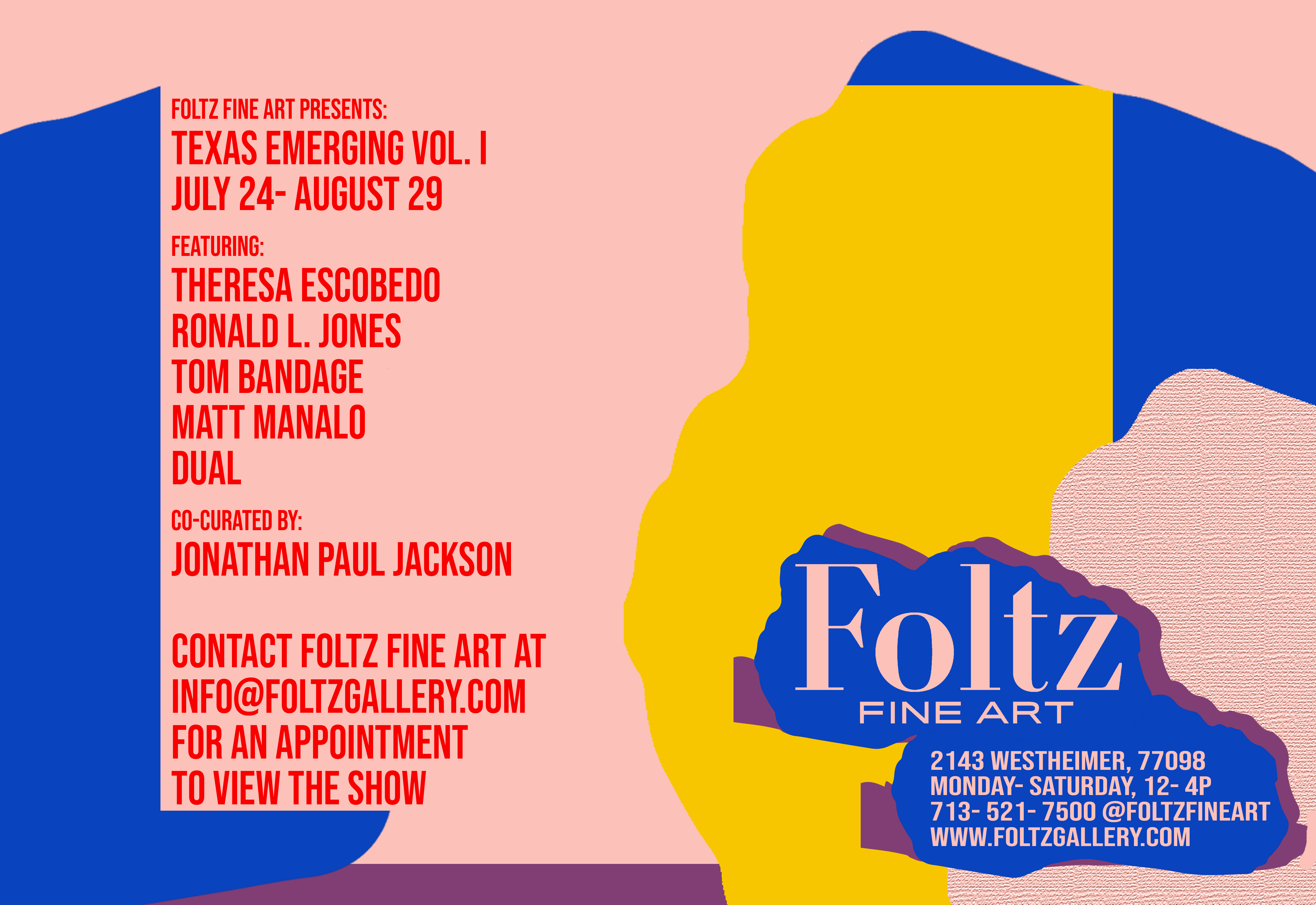 Ronald L. Jones is a multidisciplinary artist based in Houston, Texas. His artistic practice incorporates photography and video, drawing and printmaking, as well as sculptural installations.

Jones’ artwork explores barriers between artists and audiences, individuals and their communities and the perceived normalcy of everyday life.

We don't give ourselves time to think about anything anymore....and right now with covid-19, you can't isolate a thought, everything is beating you up, so it helps to have the opportunity to create something, where I can just stop and just be still and then try to figure out where I want to go, going forward. - Ronald L. Jones on creating his fiber sculpture for the Emerging Texas Vol. 1 group show

DUAL stands for the conflict between “street art” and “fine” art, between freeway burners and gallery exhibitions, between mass recognition and total anonymity. His bold lines and fresh colors are a break from the everyday monotony of life in the city—a taste of urban subculture, whether you asked for it or not.

While one may not have a choice in where and when they encounter a DUAL piece, DUAL leaves it up to the observer to assign a meaning to his work. By operating under a pseudonym, he lets his audience write their own narrative for who he is and the message he is trying to get across.

Perhaps best known for his work with wheat paste, particularly since his feature in the 2011 wheat pasting documentary Stick ‘Em Up!, DUAL has never been one to confine himself to a particular medium, background, or context.

He has been recognized not only for his work with silkscreen and spray paint, but also for his work with lithography and acrylics. Though his obsession with “making marks” stems from his background in graffiti, he has translated that into a passion for creating art. His “art” includes everything from large-scale murals, to paintings on canvas, to meticulously made tape collages, to the forgotten art of sign painting. Dual’s work has evolved from gestural character studies, to more hard edge abstraction with an added exploration of color – creating quite the dichotomy between the “street” artist and the “fine” artist.

In addition to being a constant presence on the street and a fixture in the Houston art scene since 2005, DUAL has also pursued a formal arts education and his work has seen more than its fair share of gallery walls. DUAL has been featured in a number of exhibitions by some of the top names in the Houston art scene including M Squared Gallery, Pablo Cardoza Fine Art, Colton & Farb Gallery and Station Museum of Contemporary Art.

Some of the paintings have references that I'm touching or looking upon, and then other ones are just complete creations from the mind, right there on the spot.....I'm constantly thinking of  how to camouflage it, how to abstract in a way where, yeah, I know what it is, but I want the viewer to have this brand new idea. - Dual

Matt Manalo was born in the Philippines. He received his Bachelors of Fine Arts in Painting and a Minor in Art History from the University of Houston. He makes work and resides in Houston, Texas.

Manalo creates work which involves elements of painting, drawing, sculpture, photography, and printmaking. He uses raw materials, found objects sometimes collected and often times donated... By doing this, he is making his practice environmentally conscious as well as understanding the idea of scarcity and abundance. He uses the grid as a foundation for most of his work to tackle geography, cartography, borders, and the idea of displacement while having a constant conversation of how “home” should be defined.

Being a first generation immigrant, Manalo discusses his experiences navigating around the physical and social structures of society through his work. As he explores this, home becomes a two-part environment where the artist is split between the Philippines and Texas. The latter sits on the southern border of the US. It is also important to mention that colonization of the Philippines by Spain, Japan and the United States resulted in erasure, colorism and colonial mentality; a frequent topic in Manalo’s work. Manalo is the founder of Filipinix Artists of Houston, a collective of visual, performing, literary, culinary, and multidisciplinary artists. He also runs an alternative art space: Alief Art House.

...There's a statement that I use all the time, which is "not your brown brother", it's basically a call to action for people like myself, that we can stand up, that we are not leaning towards a more racist mentality or practice. - Matt Manalo

Tom Bandage is a budding sculptor who recently relocated to Houston, TX after being based out of Austin, TX. A student of computer science and studio arts, his work is informed by concepts of axioms and epistemology. Constructing perspective-challenging performances and works, he explores autopoesis, information flow, and the architecture of experience.

Inspired by the machinist's craft and the volumetric simplicity of the Bauhaus, Tom Bandage attempts to capture the shape of thought through geometric contortions of material.

Tom describes his sculpture work as conceptual - not in the sense that there is a concept to be gained or instructed, but rather that the work itself represents the structure of Concept as the object being studied. In this light, his geometries focus on the interaction between pure form and semiotic reference. By playing with form directly and intentionally avoiding reference to a signifier, his work creates novel viewing experiences that draw forth a sense of intuition through a meditative play on perspective, giving the viewer complete control over what is to be signified.

A lot of  my work is spent in that phase of negotiating between what I would like to see happen and externalities that force me to control my vision and really thoroughly plan out how it's going to be made. -Tom Bandage

Theresa Escobedo is a multi-disciplinary artist, curator, and arts administrator currently living and working in Houston, Texas. She studied at the University of Houston and received a Bachelor Degree of Architecture in addition to a Bachelor of Science in Environmental Design with a focus on community planning.  She manages Civic Art for the City of Houston through the Mayor’s Office of Cultural affairs and is a current Artist in Residence at the Zocalo Artist Residency through the year 2020.

As an artist, her work intersects ancestry, history, and spiritualism, and most recently merges ideas on land, nature, and the act of pilgrimaging. This effort combines expressions of the artist’s cultural heritage with intellectual, emotional, and spiritual considerations to demonstrate and ultimately represent cosmopolitan influences and spiritual perspectives.

For this exhibition, the artist presents Journeying: Land, Memory, and the Realm of the Spirit, an ongoing series of photographic works which document pivotal moments in the artist’s spiritual evolution, her journey toward intergenerational healing, and the dawning of deep self-knowingness developed from the pursuit of ancestral connection.

We are most likely to accept offers of 10% or less off the list price.

You will receive an email confirmation